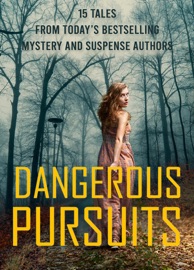 The chill of fall brings with it a hint of peril in Dangerous Pursuits.

CIA Officer Branch Collins is saved by a dead woman. Is she a hero or a traitor? Everything rides on finding out the answer.

The Last Day by Lisa Harris:

When Dr. Hope McQuaid stops at the scene of an accident on a lonely west Texas highway, she becomes a bargaining chip for two dangerous fugitives with nothing to lose.

When sleep deprivation skews her judgment, grieving young mother Mae risks everything to save a baby—only to wind up accused of a crime.

A Time to Hunt by Cynthia Hickey:

A bestselling author finds himself mired in a plot straight out of one of his books, and the clock is ticking down to the death of those around him.

Don't Look Down by Gina Holder:

Can she prove a killer's guilt before he silences her forever? Erynn, owner of the Gourmet Gal food truck, witnesses a murder, but no one believes her.

Heiress and experienced climber Jolie Decouteau doesn't believe in coincidences, so getting acute mountain sickness while on a hike shortly after her father is found dead convinces her that someone is trying to kill her.

One of the felons recovery agent Fitz delivered to authorities has escaped from his maximum-security prison and is coming after Fitz and his loved ones.

Deaf since birth, Heidi Martin is excited about her new career as a counselor at the school for the deaf. Until she walks in on a murder and must flee to stay alive.

In the cross-hairs of an Amish criminal kingpin, Naomi Boentreger is forced to uncover family secrets first and trust the man she once loved yet now barely recognizes.

After a tragic mistake, Lola Armstrong left the U.S. Marshals and rancher Abe Everhart far behind. Now Abe's on her doorstep with retrograde amnesia and his twin niece and nephew in tow.

Courage on the Run by J. Carol Nemeth:

When innkeeper Casey Hartman witnesses a murder, can guest DEA Agent Will Kerns keep her safe from the killer as they head out on the run?

Stepping from Shadows by Cara Putman:

When Emma Donahue goes home, it's time to find answers or die trying. She has days to discover the truth or she'll lose her inheritance. After years of trusting no one, can she risk relying on Lance Updike?

What starts as an online computer game becomes a life-and-death struggle for Jorja Hale and her teen brother, plummeting them into a deadly underground network.

Protecting the Heiress by Terri Reed:

A reluctant heiress needs the protection of the intelligence officer who broke her heart if she is to make it to the reading of her father's will alive.

The Winter Pearl by Lenora Worth:

When antique-jewelry store owner Hannah Dupree mistakenly receives a priceless pearl necklace, someone is out to kill her and get it back.