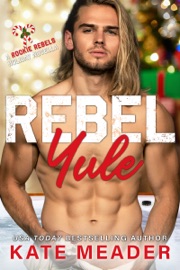 Chicago Rebels goalie Erik gets his shot at love . . . but first he'll have to figure out what he did to offend the woman he's crushed on forever.
Casey Higgins, assistant to the Chicago Rebels owner, has a smile for everyone who comes into the front office—everyone but goalie Erik Jorgenson. And he has no idea why. For the last year, she’s refused to give him a kind word, and finally, he’s had enough. At the Rebels holiday party he’ll uncover the root of their mysterious conflict and show this woman that goalkeepers do their best work . . . on their knees.
Can a little Yuletide cheer get Erik into Casey’s good graces, warm bed, and frozen heart? Or will he fumble the puck and lose his chance? Join the Chicago Rebels this holiday season and find out if Erik is as good at saving Christmas as he is at saving goals!